So: Gerrymandering.  Everyone agrees that it’s a problem (“just look at that twisty district!”), but it’s hard to agree on a solution.  In particular, I’m learning, it’s tough to define a threshold for gerrymandering in a way that’s useful for a court, judge, or other impartial referee to use.  Getting that impartial referee is super-hard. Giving that referee the tools to use to do their job is, I’m learning, the other half of the challenge.

I’ve been working through the article “Here’s How We Can End Gerrymandering Once and for All“, which is an attempt to come up with a useful, repeatable mathematical threshold for defining an unacceptably gerrymandered district.  That article is a summary of the more formal “Partisan Gerrymandering and the Efficiency Gap“, published in the University of Chicago Law Review.

In the article, Eric McGhee and Nicholas Stephanopoulos calculate an “Efficiency Gap” to measure how out-of-balance a district is.  To calculate the efficiency gap, you start by counting the number of “wasted votes” that each side had in a given election.

“The efficiency gap is simply the difference between the parties’ respective wasted votes in an election, divided by the total number of votes cast.”

The authors go into some detail in a hypothetical example, but honestly the textual explanation was clear as mud to me, so I thought I’d work it out on the widely-shared “How to Steal an Election” diagram.  Surely there would be a low efficiency gap in the “fair” example, and a high efficiency gap in the “unfair”, “stolen” example!

Surprisingly, it didn’t work out that way.

Scenario A: Compact and Contiguous

I started by calculating the wasted votes and the efficiency gap for the middle diagram, which is the one I had thought of as “fair.”  In the diagram below, the 50 votes are split into five compact and contiguous districts.  Red is the minority of votes in each district – that’s four “lost” votes for red in each of the districts.  Blue has six votes in each district. That’s exactly the margin needed to win, so there are zero surplus votes:

Scenario B: Packing and Cracking

That’s a total of two wasted votes for red and eighteen wasted votes for blue.  The difference of eighteen and two is sixteen.  Sixteen divided by fifty total votes is 0.32. So in this diagram, there’s a thirty-two percent efficiency gap in Red’s favor.

Here’s the thing that I totally did not expect to come out of this exercise: going by the efficiency gap, the “bad” gerrymandered diagram is actually fairer than the “good” contiguous diagram!

The majority of representatives is out of balance, but overall, more voters actually have folks that represent them.

I should point out that a 40% efficiency gap and a 32% efficiency gap are both terrible. Kate tells me that the Fair Districts PA folks, using Wisconsin as a benchmark, considers a 7% efficiency gap to be the maximum allowable.  So this example in no way shows that gerrymandering is “good” or anything like that; it just served to teach me that “compact and contiguous” isn’t automatically the same thing as “fair”.

Since electoral maps aren’t actually made up of neat rectangles of voters lined up in ranks and files, I think I’ve exhausted the usefulness of this exercise.  But I think I get the point of the efficiency gap math now — as well as an underlying goal of Fair Districts PA — the point isn’t to get the “right” majority, the point is to minimize the number of “wasted” votes, and maximize the number of voters who get to choose their representative.

A third scenario: what about “perfect” districts?

Okay, I wanted to see what the theoretically completely fair example would be — but even that did not come out the way I expected:

BUT! The existence of the “wasted” votes in this scenario, in the form of the four surprus votes in each district, reveals another problem.  The districts are not competitive.  A blue representative doesn’t have to do anything to get elected, assuming their party doesn’t throw a primary challenger at them.  Kate points out that it’s good to have competitive districts, because that encourages moderate candidates that can appeal to as many voters in both groups as possible.  That makes sense to me! But that’s probably a topic for another blog post.

I’d be really interested in your perspective on what I’m overlooking, here.  Is there useful further reading that you’d suggest?

Gerrymandering and the Efficiency Gap (an exercise)

The Pussy Hat Project has been on my mind — Kate has been cranking out hats like a MACHINE, with beautiful results.  So far, she’s knitted nineteen or twenty hats, all of which will be on heads at the January 21st Women’s March on Washington.

A couple of days ago, this article in the Lifestyle section of the Washington Post really ticked me off: “Pink hats, pins, petitions: What’s the point of these anti-Trump protests?”

The article, with its overtones of “happy hands at home” was shallow, patronizing, and dismissive.  Which is all the worse for how predictable it is.  Sure, if wearing a safety pin is all you’re doing, maybe you’re “just” a clicktivist.  What’s the point? Why stand on the sidelines and yell “well, that’s not gonna do anything!”?  And that article seems to have mirrored some big Facebook-group discussions that Kate has told me about, where folks are arguing with each other about how the Pussy Hats “aren’t serious”, etc.

So today, after watching the Blackish episode on Trump’s victory, Kate noticed the white hats on the men behind Dr. King, and wondered aloud “Hmm, what are those hats?”

My assumption was that they were Nation of Islam hats. I was curious, so I did some Googling.  I came across this 2008 Straight Dope forum thread and this one from 2013.

The general consensus is that those are not Nation of Islam hats, but rather Gandhi Caps, associated with Gandhi’s nonviolent Indian independence movement.  In other words, they’re political solidarity caps worn by participants to show their alignment with the movement.  The BBC has more background on the history of the Gandhi cap, and its role in rallies and marches.

Those white caps surrounding the podium are pussy hats!

Here’s a wider shot of Bayard Rustin at the 1963 March on Washington, with a wider shot showing more folks wearing the caps.  According to the forum posters on The Straight Dope, Bayard Rustin traveled to India in 1948, and Dr. King went in 1959.  It seems totally likely that either (both?) brought back this symbol of solidarity: 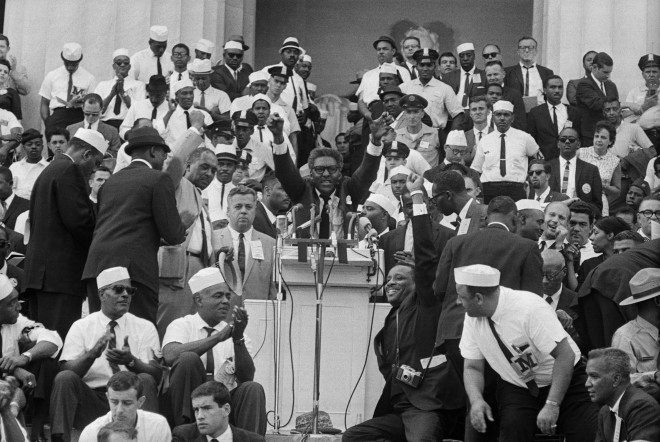 I have not been able to find anything on the Pussy Hat Project website talking about how a sea of pink hats at the Women’s March is an echo of the sea of white hats at Gandhi’s rallies, or at the 1963 March on Washington.  I can’t be the first to notice this, right? This has got to be on purpose, yeah?